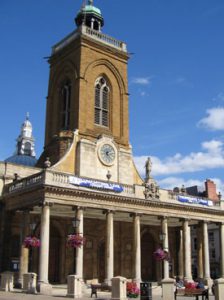 Inscriptions on the bells

DELIVER US
FROM FIRE, FROM WATER
AND FROM ALL MISADVENTURE

LORD
WHO SHALL SIT BESIDE THEE
ENTHRONED ON EITHER HAND
WHEN CLOUDS NO LONGER HIDE THEE
AND ALL THY FAITHFUL BAND?

The present church was built in the last years of the seventeenth century and the early years of the eighteenth century following the destruction of its predecessor during the Great Fire of Northampton in 1675. The crypt and parts of the tower are all that remain of that church.

Six bells originally hung in the tower, and these were replaced in 1782 by a peal of eight with a tenor of 23cwt cast by the London bell founders, Chapman & Mears. These bells were rehung in a new metal frame in 1906 by the Oxfordshire bell hanging firm of Webb & Bennett who came from Kidlington, north of Oxford. The canons were removed from the bells at this time. In 1935 the bells were retuned and rehung in the same frame but with new fittings by John Taylor & Son of Loughborough, Leicestershire. The tenor weight now was 21 and a half cwt. The first peal on the bells, Plain Bob Major, was rung on 5th November 1784. Forty peals were rung on these bells.

In 2006 these bells were removed and a new peal of ten bells installed, all work being carried out by Taylors Eayre & Smith Ltd of Loughborough. Each of the new bells has been named, and these are, from treble to tenor, Corpus Christi, The Blessed Virgin Mary, St Anne, St Osyth, St James, St John the Evangelist, St John the Baptist, St George, The Holy Rood and The Holy Trinity, These were the names of the ten small chapels or altars in the Church of All Saints that was burnt down during the Great Fire of Northampton in 1675. The inscriptions on the new bells, some of which are in Latin, were chosen as being appropriate to the bell’s name. The first peal on the new bells was 5040 Yorkshire Surprise Royal and was rung on 4th February 2007.

In 2016 a simulator was installed with bells 3 to 8 inclusive being wired for use.